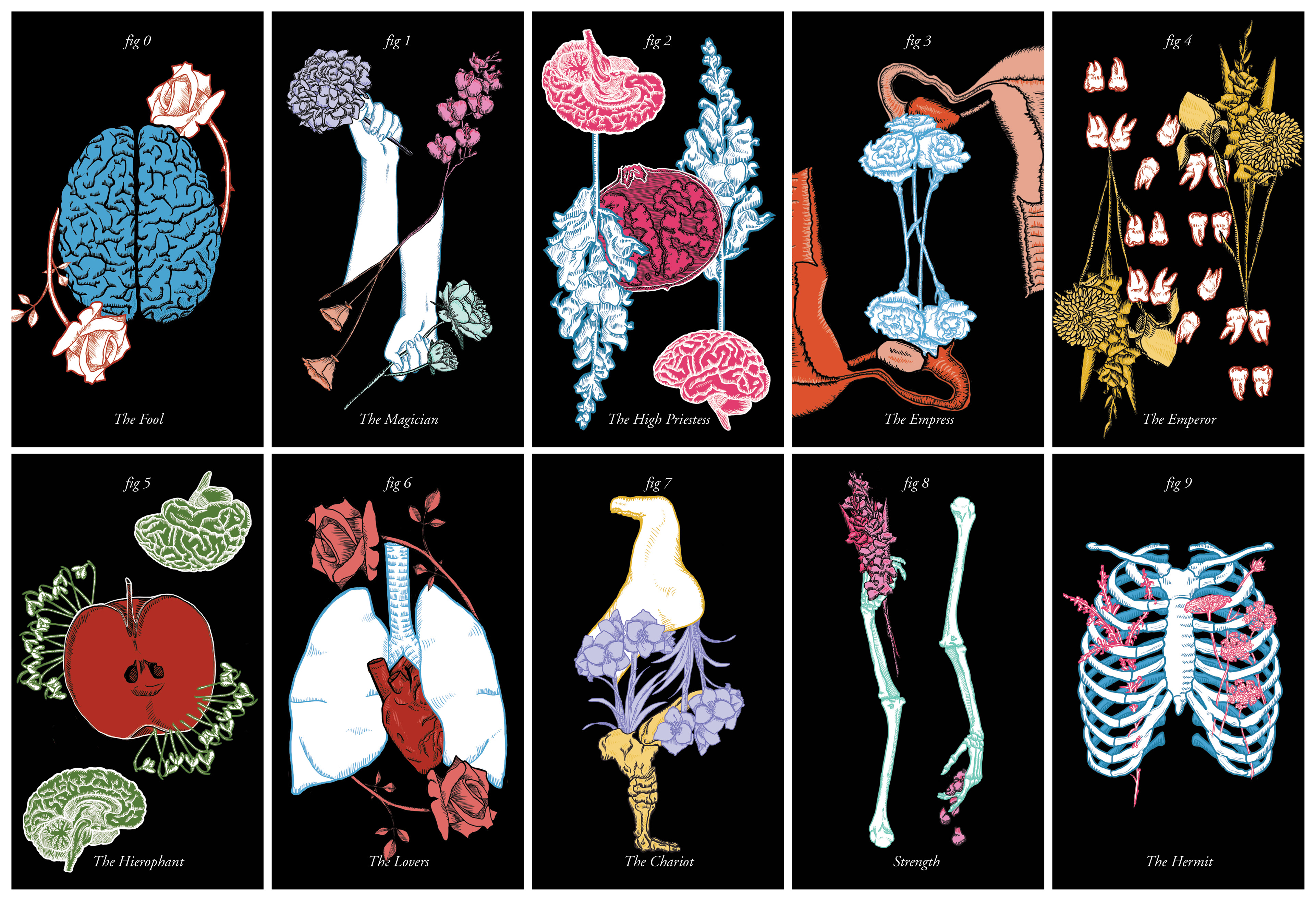 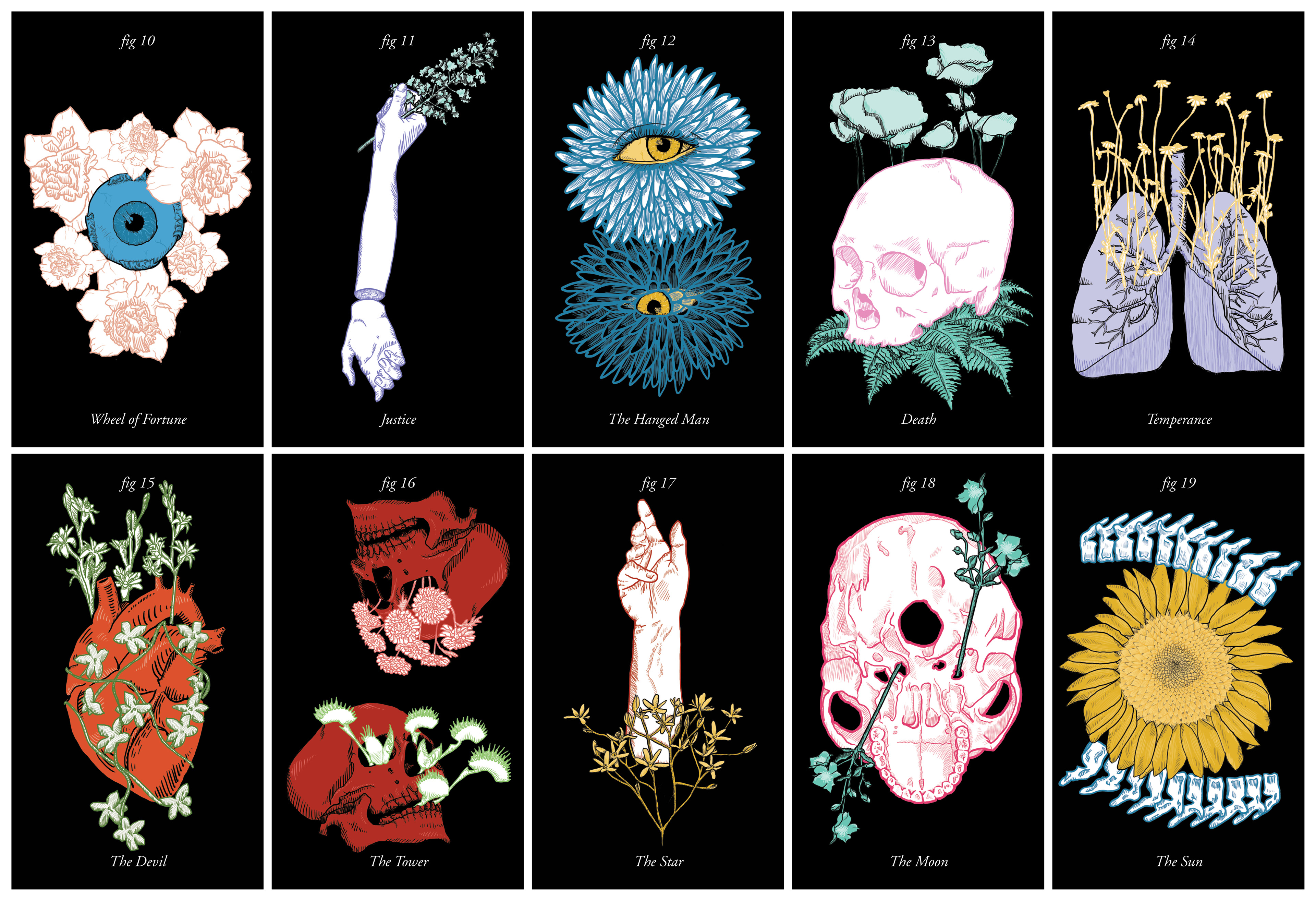 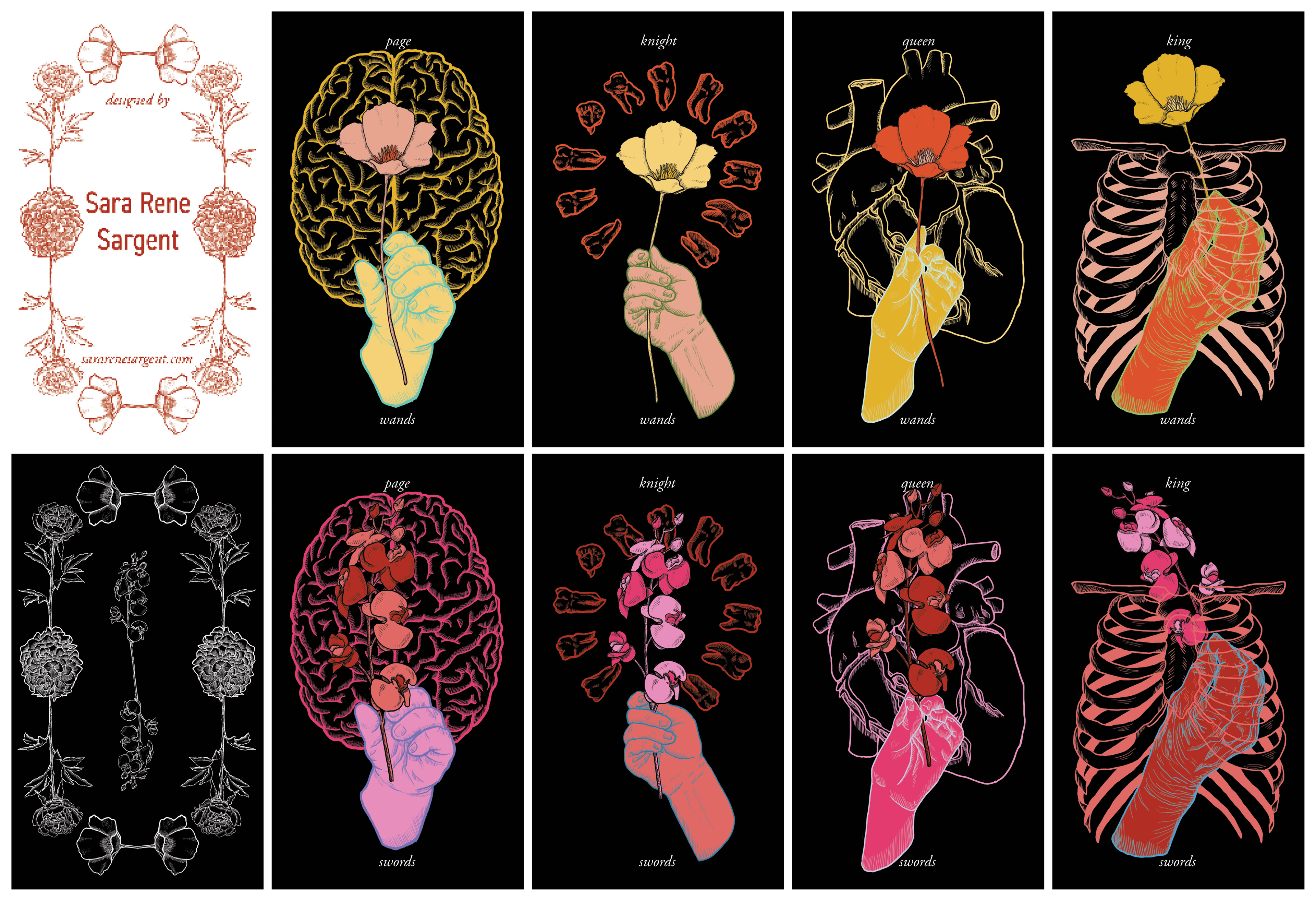 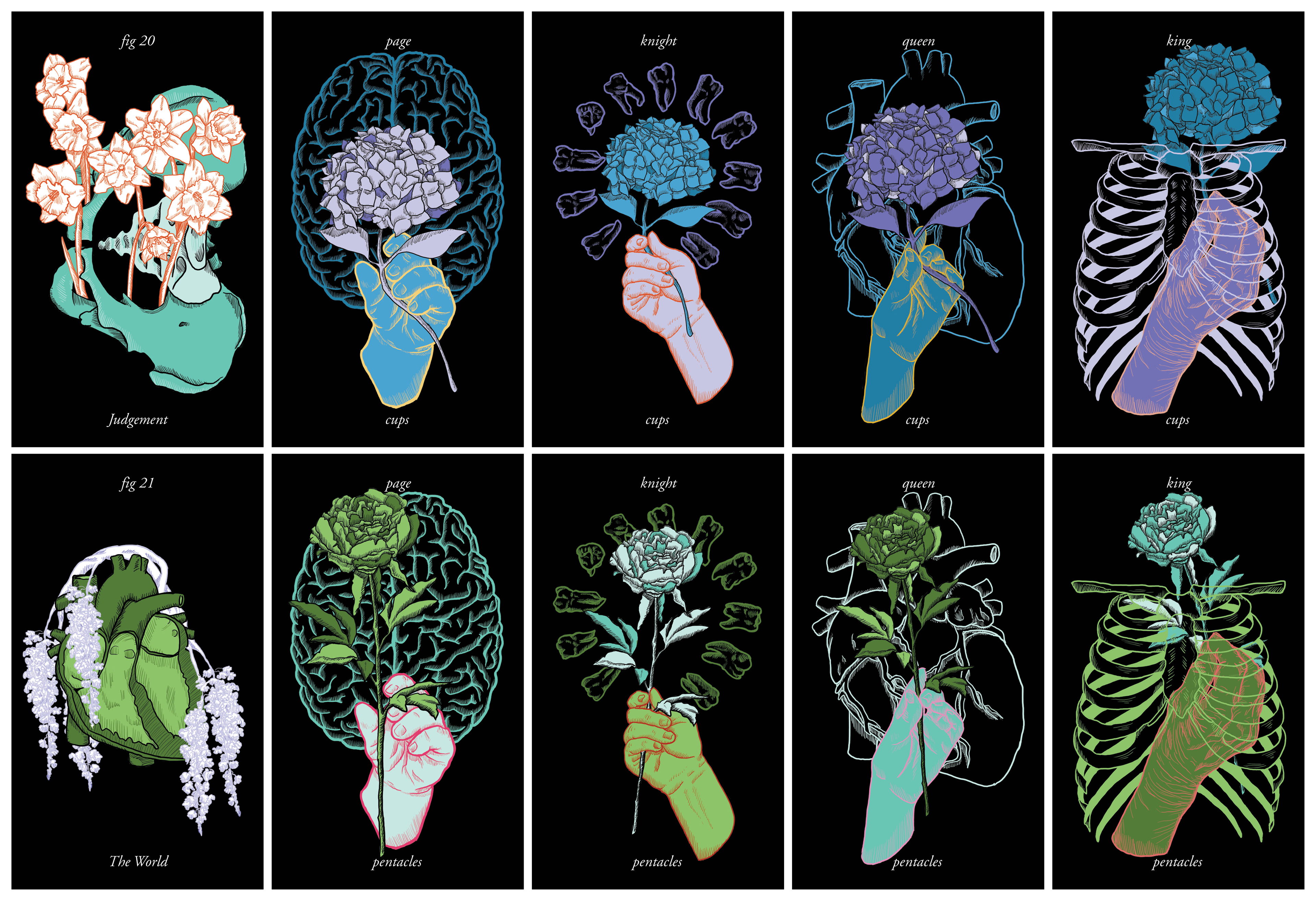 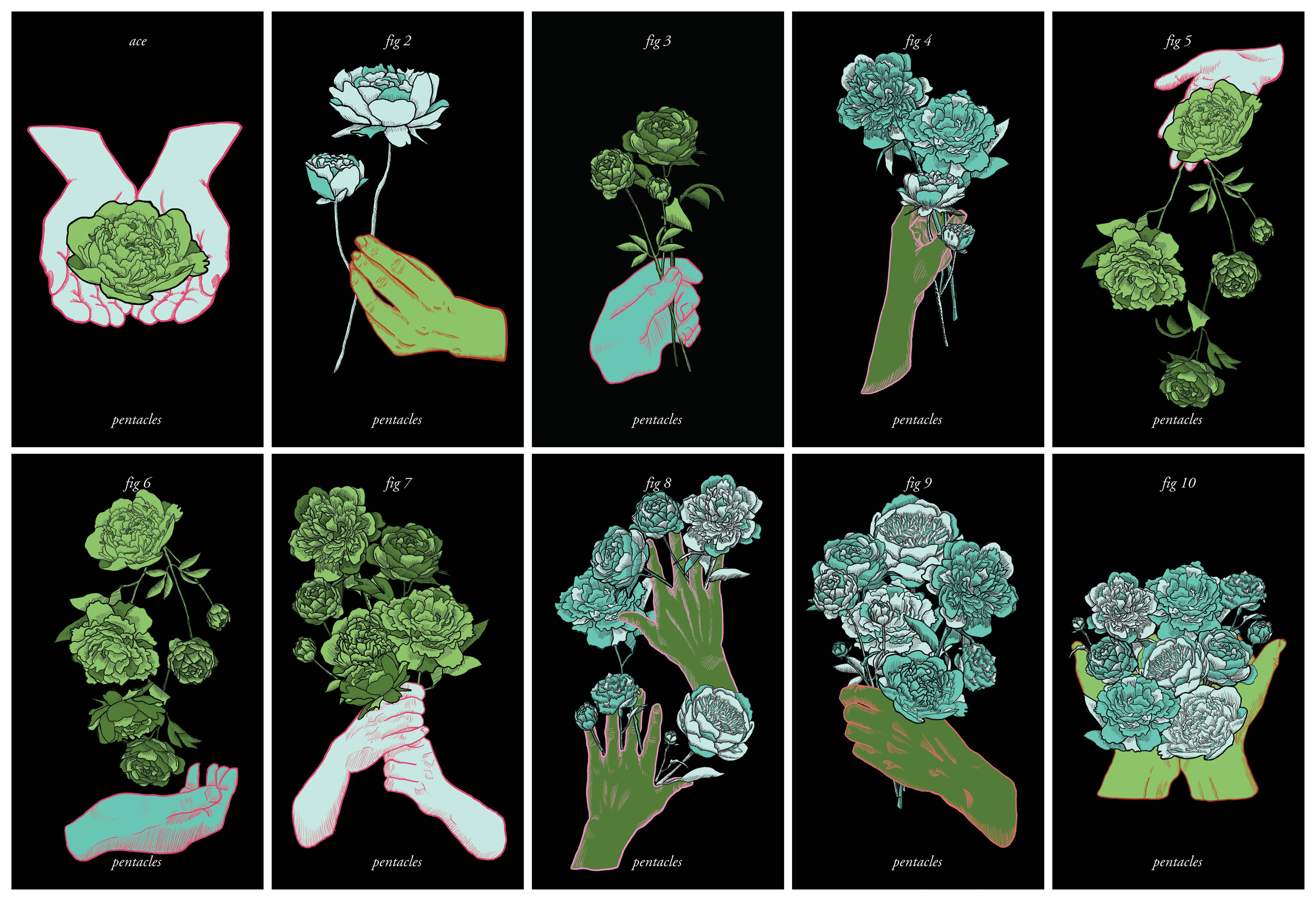 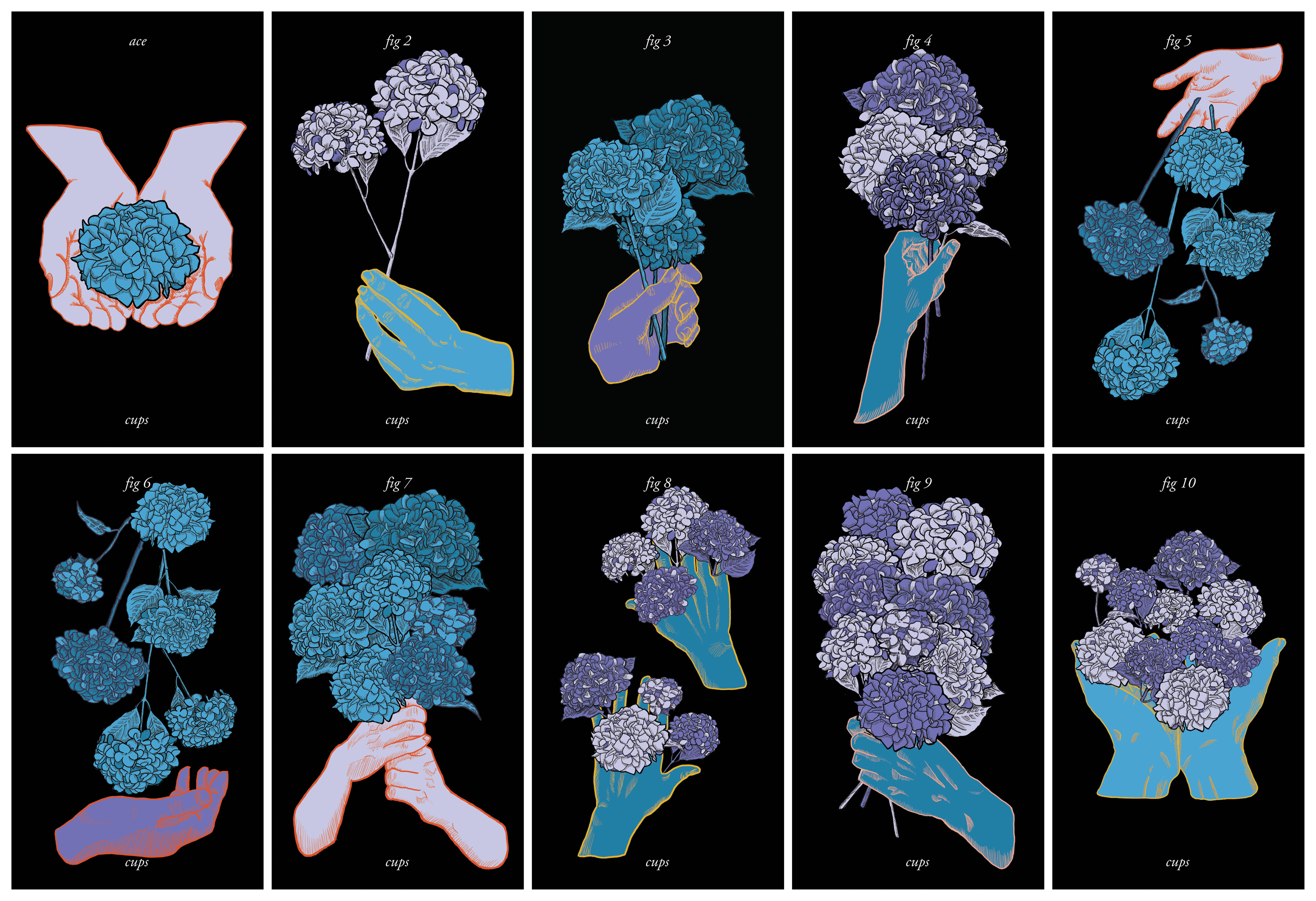 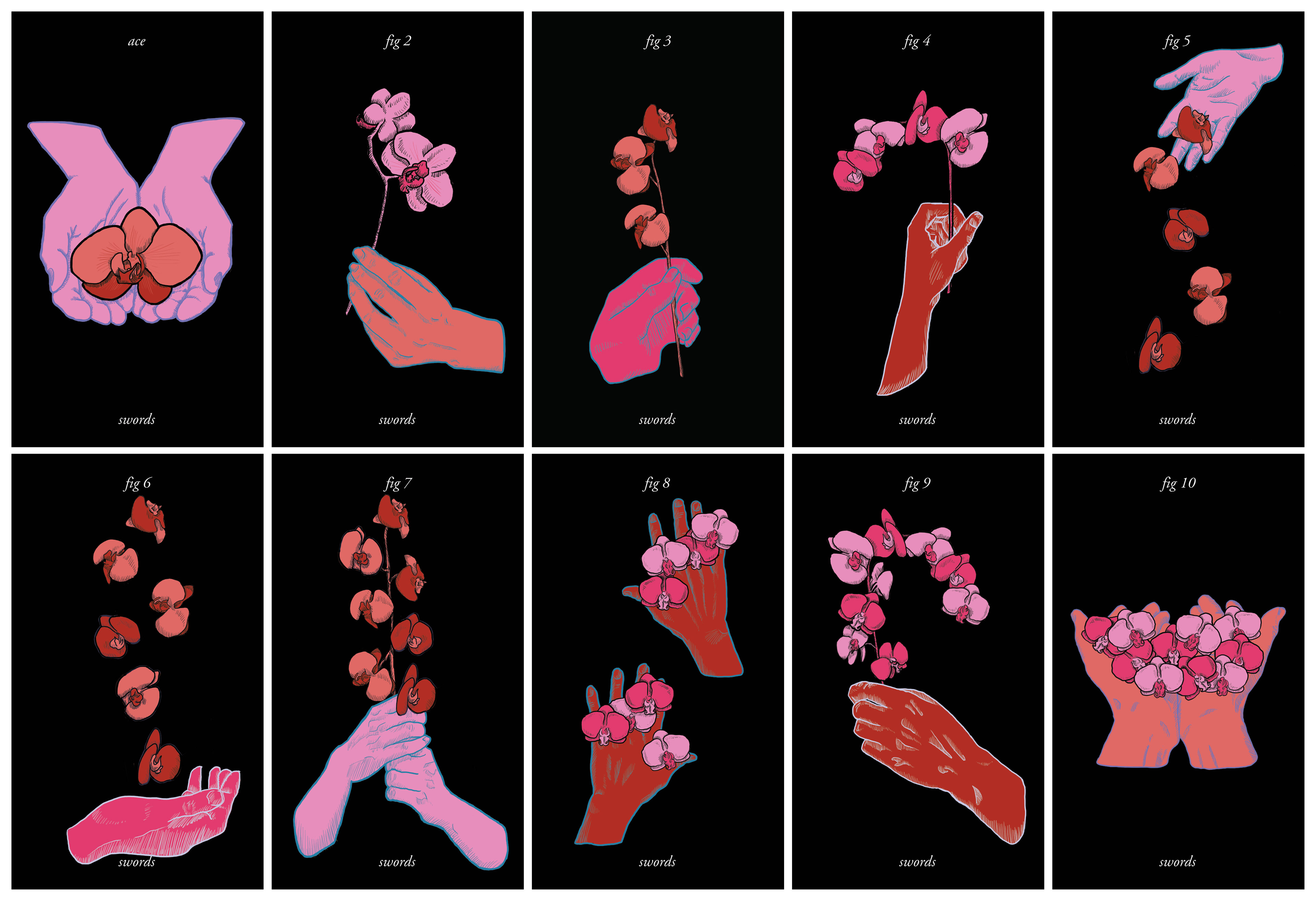 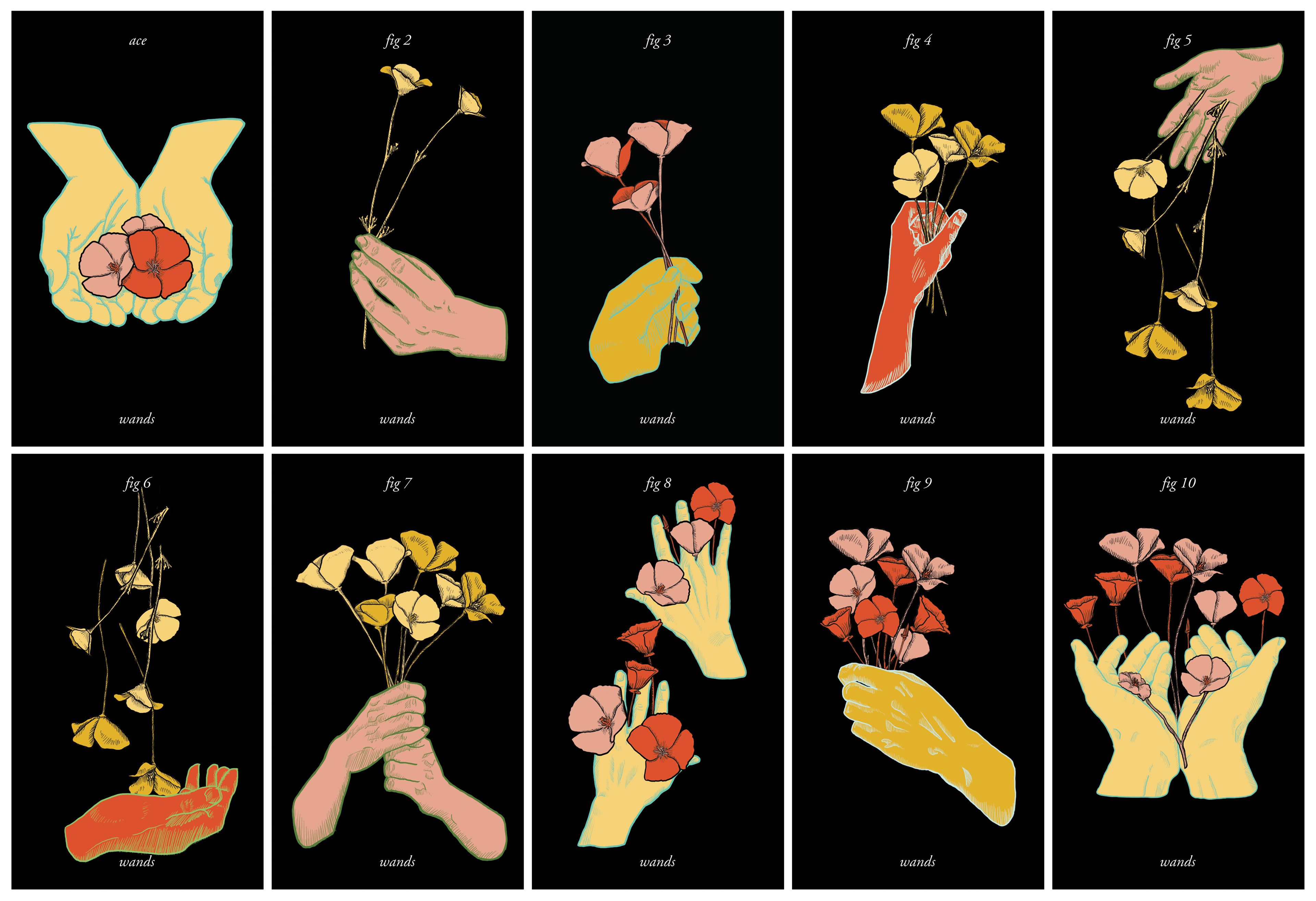 RESEARCH BRIEF
Background
Witchcraft and the occult have been around for hundreds of years. There are many different cultures that have contributed to what we consider witchcraft today. There has also been a rise in an interest in tarot, astrology, palm reading, ouija boards, and the overall “witch” aesthetic. I am interested specifically in how to intrigue the general public with tarot and what positive effects it can bring to their lives.
Objectives
I hope to learn the history of tarot and where the thought of it being powerful came from. I also want to learn what the general population thinks of the resurgence of spooky and supernatural content coming into the mainstream, including divination decks. I also want to learn if other people are as interested in its history as I am and if so are they interested in learning to read tarot themselves?
Assumptions
I believe that this resurgence in witchcraft in the mainstream is a reclamation of feminine identity. I also believe that the occult is inherently feminist. This embrace of alternative femininity is being enjoyed and adopted by people who generally identify as male as well as those who identify as female.
Audience
I believe my audience is Americans between the ages of 18 and 35. I think it may also stretch beyond that in terms of geography and age. I want to make sure I include men in my research and marketing because expressing feelings and talking though problems can be discouraged in our society today. Tarot is a private way to deal with issues and would benefit people who feel uncomfortable vocalizing their issues. I think my audience isn’t limited to people who believe in the superstitious, but it will be easier to get those people interested in my finished product.
Topic
My topic began to change over the course of my research to reflect a more narrow scope than what I originally began researching. While I started researching peoples general thoughts on witchcraft I began to focus in on tarot specifically a little before midway into this project. I specifically was looking for the general publics perception of tarot, how people who already use divination cards interact with them, and the history of tarot and why people can be so drawn into it.
Methodology
I plan to conduct a lit review to obtain the history behind tarot and any information about what it does psychologically. I also plan on conducting a survey of the general public to see where they fall in terms of believing in general witchcraft and occult practices. I then want to do an ethnography and watch two people interact with divination cards and see what is important to them while reading.
Design Context
There is an iconic design in tarot decks and ouija boards but design for astrology and palm reading is a bit more diverse. The most widely distributed astrology comes in the forms of newspapers and magazines as well as memes on instagram and twitter. For palm readers storefronts with neon signs or tents on the side of the road with a piece of cardboard describing who they are among the range of design aesthetics employed. There is no real design system for witchery. Purple and black are general color themes and stars often play an aesthetic role. Other than that general knowledge, I believe I will learn more about designs it may have had in the past while researching.
Defined Question
Are people interested in reading tarot or having it read for them? What are the benefits of tarot to the average skeptic?

LITERATURE REVIEW
Process
I began my lit review by searching different academic journal databases for articles on witchcraft and psychology. It was during the search of articles for this lit review that I became more interested in tarot and started to focus in on different psychological explanations of tarot.
Goal
My goal for this method was to fill in any blanks I might have had about the history and uses of tarot from the academic perspective.
Barnum Effect
My research into tarot led me to learn about the psychological phenomena known as the Barnum effect. This is the name of the occurrence where someone will be told that a very general description is specifically tailored to them. Despite its vagueness, they will believe that it is describing them because they were told so before they began reading. Although this article was speaking about the Barnum Effect in reference to astrology, this works with tarot. Each tarot card has a meaning. By putting the meanings of each card in a spread, together it gives a very general description that people will interpret to mean something specific for them. This article doesn’t go into it but I believe that this ability for the human mind to project its own problems onto vague statements is what helps people to “see the future” by working out possible solutions through their issues, as if an outside source was telling them what to do.
Tobacyk, Jerome, et al. “Paranormal Beliefs and the Barnum Effect.” Journal of Personality Assessment, vol. 52, no. 4, 1988, pp. 737–739., doi:10.1207/s15327752jpa5204_13.
Psychic VS Psychological
This journal talked mostly about the history of tarot, what people who believe in the paranormal believe about it, and what psychological effects are present when interacting with it. I found it interesting that in the “psychic” portions of the paper they mostly talked about how people connect their problems to the cards and believe different cards come up to inform them about those problems, where as the “psychological” portion of the paper chalked this up to how this can be part of the Barnum effect or “cold reading” (when a con artist looks for clues about you and uses leading questions to drive you to a conclusion). I personally believe after reading this journal article that both can be right. Yes, the Barnum effect is in play, making the reader relate their issues to the cards, but the way people see their problems in the cards helps them start to tackle them.
Ivtzan, Itai. “Tarot Cards: A Literature Review and Evaluation of Psychic versus Psychological Explanations.” Journal of Parapsychology. Spring-Fall2007, Vol. 71 Issue 1/2, p139-150. 12p.
Millennial View
This article  from a newspaper talks about how a millennial author and other millennials, a large portion of my audience, are turning more and more to tarot cards for comfort in uncertain times. The author discusses how most millennials are nervous financially and they are the least spiritual generation, so tarot can be a place to find solace. This article doesn’t totally follow the point I am trying to make about tarot, but it does prove that many people in my target demographic are interested and willing to pursue my future product.
Tait, Amelia. “Why Millennials Are Looking for Meaning in Tarot Cards.” New Statesman, www.newstatesman.com/politics/uk/2018/08/why-millennials-are-looking-meaning-tarot-cards.

ETHNOGRAPHY
Process
I asked two people who I knew used some form of divination deck if I could watch them do a reading for themselves. I wanted to study what they do differently from each other and what things were similar. One of my subjects was a man in his mid twenties who reads lenomand cards and the other was a woman in her early thirties who reads tarot. Through this experiment I learned that they both value the insight  the cards give them through self reflection and they both think it is important to take care of and respect their cards.
Goal
I hope to learn how people who are already familiar with divination decks use theirs and what they like most about them.
Analysis
One similarity that I found interesting was they both had art decks rather than the traditional cards most people associate with tarot. The man in my study also informed me that one reason he hadn’t gotten into tarot yet was because there were so many cards to memorize that it was daunting, which made me even more certain that my goal to make tarot accessible to everyone was a good starting point.
Woman Early 30’s
Starts with a simple “body/mind/spirit” reading and follows up with two “past/present/future” readings, one for love and one for spirit.
Shuffles deck and lets it drop into piles that feel natural.
Uses a journal to document every reading.
Talks out loud to think through what each card means.
Normally lights candles and drinks tea, but doesn’t connect to crystals.
Thanks cards before putting them away.
What she most appreciates out of the cards is how the cards make her focus in on whats going on in her life and work on ways to better herself. She respects them and treats them well. Her cards are watercolor illustrations.
Man Mid 20’s
Keeps cards in case wrapped with a blue bandana.
Inside the case is a small crystal which he sets on top of the case with one he takes off his neck after pulling out cards.
Shuffles deck and then puts cards into a grid of 9 once finished.
Prefers to work through card meaning in head rather than out loud.
Will occasionally light incense.
Likes both the spiritualism and self reflection that the cards bring. Has deep respect for cards but they are obviously worn from use. Geometric and gradient digital illustrations.

SURVEY
Process
I started by creating general questions about witchcraft and vaguely supernatural things to gauge what most people thought. I made two sets of questions, statements that had a scale of strongly agree-strongly disagree, and then a set of questions asking if people would be interested in certain witchy things with the options of yes/maybe/no. I also had two short answer questions, “What are your perceptions of witchcraft and witches in pop culture today?” and “When you think of the word ‘witchcraft’ what comes to mind?” I had three questions directly about tarot to see what people thought of it with the context of it being occult.
Goal
My goal this the survey was to see what the average person thought not only of the whole concept of witchy things, but specifically tarot cards without making it obvious that was the information I was most interested in.
Analysis
It seems to me that most people are interested in tarot. This is good to hear with my goal being to get people who wouldn’t be normal interested in tarot, or are on the fence about it, involved. I do think it's interesting that more people are willing to have someone read their tarot for them than learn to do it themselves.

NEXT STEPS
Data
My most important data came from my survey and ethnography. I know that there are people out there who are interested in tarot or on the fence about it who can be drawn in. I also know that the market of people who already use cards enjoy art cards more than the classic/standard decks that everyone thinks of. My ethnography and lit review also showed that people who are involved in tarot already use it as a tool for self reflection, as I hypothesized, and it can be marketed as a self help tool. This gives more reason for people who don’t believe in magic or predicting the future to use tarot cards.
Design Plan
At least half of the cards should be roughly designed by the end of winter term along with a mock up booklet. By week 4 of Spring term there should be a nearly finished version of each card. By week 6 every card should be finished digitally and same with the booklet. Week 7 will be exploring options to produce the cards and booklet while beginning to make prototypes of the box that will hold the cards and booklet. Week 9 should see finished cards and booklets with the final version of the box having been decided on. Week 10 everything will be finished and assembled.
↑Back to Top

Insert copy here, which should vary depending on your region. Accept